18th July 1995 -
Defender Craig Short was brought to Everton from Derby County for £2.7 million. He was regarded as one of the best defenders in the game and made 90 appearences for the club before leaving to join Blackburn Rovers in 1999. Explore Craig Short memorabilia. 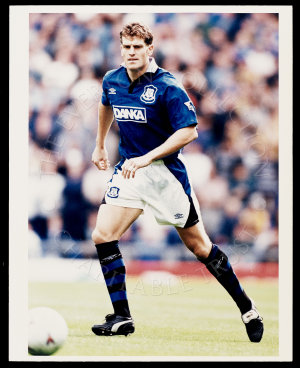 19th July 1962 - Future Everton player Paul Bracewell was born on this day in 1962. After time at Stoke City and Sunderland F.C., he moved to Everton in 1984 for a fee of £425,000. Although his career with Everton was effectively over after a serious injury left him out of the game for twenty months, he achieved a great deal in his first years at the club.  He was a member of the side that won the League title and European Cup Winners' Cup in 1985. See Paul Bracewell memorabilia.

23rd July 1966 - Portugal defeat North Korea 5-3 in World Cup quarter-final at Goodison. One of the most memorable matches ever staged at Goodison Park, North Korea were 3-0 ahead in the first 20 minutes. In the remaining 70 minutes Eusebio took over, scoring 4 times, twice from the penalty spot, to take Portugal to a semi-final clash with England. See World Cup memorabilia.