12 September 1978 -
After finishing third in the League in 1977-78, Everton qualified for the UEFA Cup the following season and met Finn Harps in a first leg match in Ireland. Everton earned a 5-0 victory with goals from Andy King, Bob Latchford, Dave Thomas and Mick Walsh. See memorabilia from the 1978-79 season. 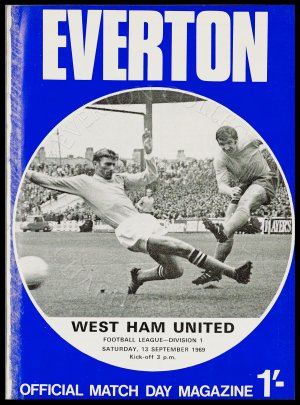 13 September 1969 - After suffering their first defeat of the season the previous week, Everton returned to winning ways with a 2-0 victory over West Ham, with goals from Alan Ball and Jimmy Husband. Read the West Ham match programme here.

14 September 1927 - Everton draw 2-2 with Bolton Wanderers. Dixie Dean took his tally for the season to 6 goals, scoring in each of the first five games of the season. Read the Bolton match programme.

15 September 1945 - Dave Clements was born in Portadown. After spells at Wolves, Coventry and Sheffield Wednesday,
Clements arrived at Goodison in 1973 and made almost 100 appearances for the first team. Read the Everton contract signed by Clements in September 1973.

16 September 1958 - Neville Southall was born in Llandudno. One of Everton's greatest ever goalkeepers, Southall began his career with Bury, costing them £6,000 from non-League Winsford United in 1980. Southall cost Everton just £150,000 when transferred in July 1981 and went on to give the Club exceptional service over the next 17 years. Whilst at Goodison he won 2 FA Cup winners' medals, 2 League titles, the European Cup Winners' Cup and 3 FA Charity Shields. He was named the FA Writers' Footballer of the Year in 1985, the first Everton player to be so honoured. See all Neville Southall memorabilia.

17 September 1930 - Everton dropped their first Second Division point as they were held to a 1-1 draw by Cardiff City at Goodison Park, Dixie Dean scoring for Everton. The Blues had started with 5 straight wins and were already top of the table, a position they were to maintain for the rest of the campaign. Read the Cardiff match programme.