4th April 1896 -
John Bell was selected to play for Scotland against England. Bell was the first Everton player to represent Scotland and in 1896 helped them defeat England 2-1 in Glasgow. Bell had joined Everton from Dumbarton after helping them to the Scottish League title in its inaugural season and already an international player, having first been picked in 1890. He won three caps whilst with Everton, all against England, and a total of ten throughout his career, later playing for Spurs, Celtic and New Brighton Tower before returning to Goodison for a second spell. He finished his playing career with Preston, eventually becoming player-coach. See all John Bell memorabilia.

5th April 1986 - Everton faced Sheffield Wednesday in the FA Cup Semi-Final at Villa Park. Everton were looking to reach the final for the third consecutive season, a feat previously achieved by Arsenal between 1978 and 1980. With Liverpool in the other semi-final there was a distinct possibility of an all-Merseyside final and both Everton and Liverpool were still in the hunt for a double; the stakes therefore could not have been higher. Everton responded magnificently, especially as they were missing Gary Lineker and goals from Alan Harper and Graeme Sharp finally saw off Wednesday in front of a crowd of 47,711. At the final whistle came through the news that Liverpool had defeated Southampton in their semi-final; the two Merseyside rivals would now meet at Wembley. Read the 1986 Semi-Final programme.

6th April 1911 - Frank Jefferis made his Everton debut in the 1-0 win at Blackburn Rovers. Born in Hampshire in 1887 he started his career with Southampton in 1905 and joined Everton in March 1911. He went on to become an important member of the side that won the League championship in 1914-15, although he missed much of the end of the season through injury. He moved to Preston in 1920 and three years later joined Southport as player-coach, retiring from playing in 1925, although he returned to play two further games in 1927 when they were short of players. In 1936 he joined Millwall as trainer and died whilst still in the position two years later. Search all Frank Jefferis memorabilia.

7th April 1928 - Everton's goal in the 1-1 draw against Bury was netted by Dixie Dean, his 48th goal of the season. His goals had come from 32 appearances, having missed three games through injury. Read the Bury match programme. 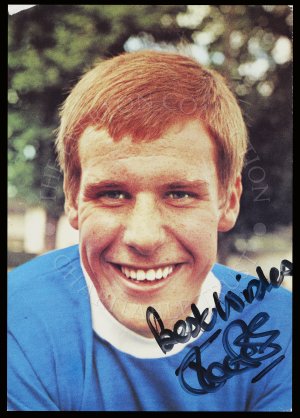 8th April 1949 - Joe Royle was born in Liverpool. One of the finest centre-forwards to have played for the club, Joe signed for Everton in August 1966, although he actually made his debut in the previous season when aged only 16. He went on to make 272 appearances for the first team before joining Manchester City in December 1974. He later played for Bristol City and Norwich City before having to retire owing to injury and then turned to management. He spent 12 years in charge at Oldham, turning down overtures from other clubs (including Everton) during that time, but in 1994 accepted the offer of taking over at Goodison Park following the sacking of Mike Walker. He left in 1997 after a series of disagreements with the directors and accepted an offer to take over at Manchester City towards the end of the season. He is now official patron of The Everton Collection Charitable Trust. Search all Joe Royle memorabilia.

9th April 1995 - Elland Road was not a popular choice for either Everton or Spurs as a venue for an FA Cup Semi-Final, even more so given a 1pm kick-off. Whilst Spurs might have been forgiven for thinking their name was on the Cup, having been re-admitted to the competition after being banned for financial irregularities at the beginning of the season, Everton had enjoyed a revival under Joe Royle. On the day it was Everton who played with greater urgency, taking a two goal lead through Matt Jackson and Graham Stuart. A disputed penalty put Spurs back in the game, but two late strikes from Daniel Amokachi settled it for Everton, 4-1 and a trip to Wembley for the final. Read the 1995 Semi-Final programme.

10th April 1985 - The first leg of the European Cup-Winners' Cup Semi-Final was scheduled at the home of Bayern Munich where, in front of 78,000, Everton were forced to defend for much of the time, the Germans intent on building a convincing lead to take to Goodison for the second leg. But they found Neville Southall in superb form, even if they managed to get past Gary Stevens, Pat Van den Hauwe, Kevin Ratcliffe and Derek Mountfield, and for once in the season it was the defenders who claimed most of the plaudits in a fine 0-0 draw.