Thanks to the generous support of Everton fan David Doran, Howard Kendall's England Schools Football Association shirt now has a new home at the Everton Collection.

Howard Kendall's first appearence in an England schools international game was in the 1960/61 season as part of the under 15s squad. He later made six appearences for England under 23s.  The former Everton Manager is on record as saying that one of his proudest footballing moments came when he played for England schoolboys. Kendall treasured his ESFA shirt for almost forty years before donating it to the Variety Club where it was bought by Mr Doran at an auction to raise funds for a charity Sunshine coach. 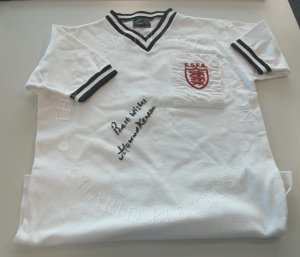 
The Everton Collection Charitable Trust relies on the support of Everton fans to continue its work. To find out more about how you can support the Collection please click here.